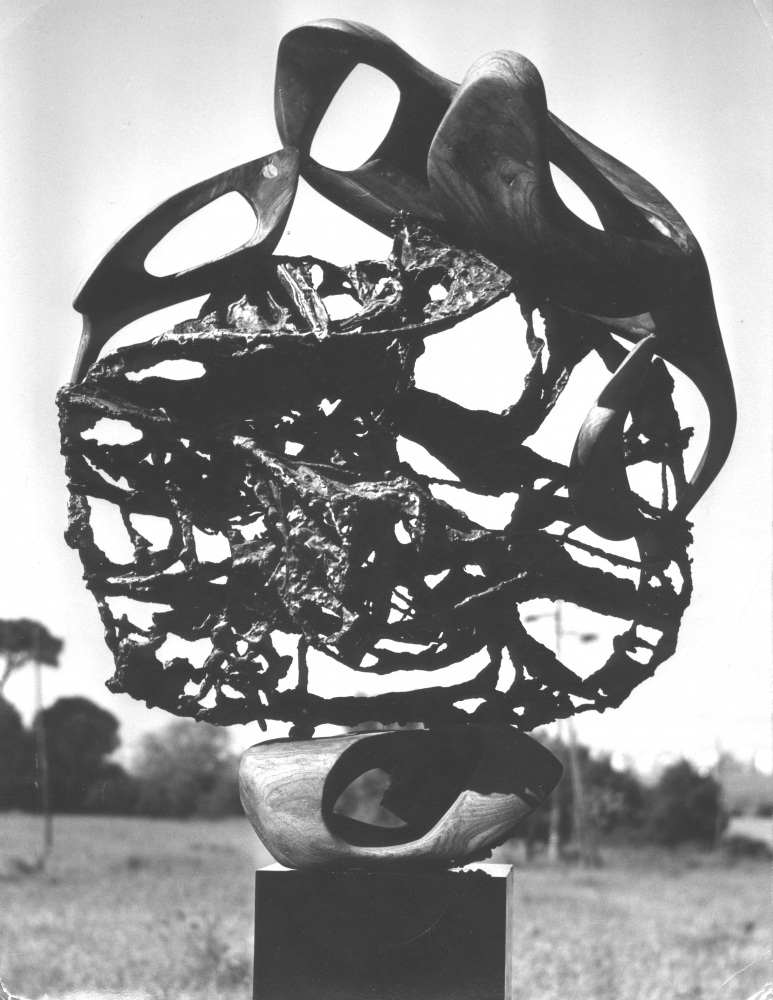 In 1960, at the age of 36, the painter Beverly Pepper took her 10-year-old daughter to Angkor Wat, Cambodia, amid a climate of fomenting internal unrest. “We were both very lucky, because that trip could have killed us,” she would later say. The American-born, Rome-based artist would spend more than a week in the temple complex, observing how its stone reliefs and statuaries intersected with the roping banyan trees that grew around and through them. She considered how the trees, whose limbs punctured the tensile surfaces of these carvings, instead of obscuring their imagery articulated its contours, situating the depictions within a nexus of inner and outer. Shortly after, Pepper made a startlingly rapid shift from painting to sculpture. She returned from Cambodia to Italy and immediately set upon transforming the felled trees outside of her house into the twisting dendroidal forms of her first sculptures, including 1961’s Laocoön, in which hollowed elm links intermingled with a mass of spidery strands of carved marble. That Pepper’s watershed exhibition , “The Quest and the Quarry,” took shape in a medium in which she had never previously worked (beyond a sole course in industrial design at Pratt College) is indicative of the conviction and tenacity of this singular artist.

Determination was instilled in Pepper from an early age. She would describe to oral historian Judith Olch Richards how, as a small child during the Great Depression, she once took a dollar from her mother’s pocketbook to buy a pencil box she’d been secretly coveting, and on discovering the theft, her father beat her so severely that she was unable to attend school for a week. “I bought my future,” she would reason of the purchase and its fallout, realizing that she wanted “to be stronger than he was.” Pepper left home at 16 to study advertising design, a concession to her mother and a bid for financial independence not thought to be afforded by a career in fine art; she would work in art direction and design throughout her twenties, painting at night, before abruptly taking off for Paris to study oil painting in earnest. She met her husband, the journalist Curtis Gordon (Bill) Pepper, in Rome, and had two children with him before the fateful trip to Cambodia, via which she hit upon the tension—between surface and substrate—that would inform the subsequent 50 years of her practice.

Pepper’s works occupy a unique space within postwar sculpture: They have been aligned (however tangentially) with the Modernist works of the artist’s friend, the sculptor David Smith, 16 years her senior; then with the Minimal “objects” made by artists who sought to literally take the sculpture off its pedestal and onto the gallery floor; and finally with the site-specific installations of Land Art, whose practitioners sought to remove the piece from the gallery altogether. None of these references is without basis, and yet none fully encapsulates her oeuvre—which has moved fluidly from the original organic forms of the first carved-wood sculptures to undulating, scale-like metal-floor works and finally to her curvilinear Cor-Ten steel works of the past decade—or expresses its underlying ethos.

Necessarily omitting the much heralded large-scale outdoor commissions that Pepper has installed throughout the United States, Italy, Spain, Switzerland, and further afield, this 2017 presentation provides a clear-eyed overview of a practice that, while continually absorbing and responding to the conceptual preoccupations of the shifting visual culture in which the sculptures took shape, has followed an idiosyncratic formal trajectory that demonstrates a consistent interest in the play between face and interior. The earliest piece on view in “Beverly Pepper: Selected Works 1968–2015,” Quadro Vuoto, 1968, installed in the gallery’s hedge-wrapped courtyard, set this concern into high relief. The work’s canny title can be translated alternately as “empty picture” or “empty square”; its four stainless-steel frames, each approximately 40 by 40 inches with a depth of 15 inches, are stacked one in front of the other at progressive heights so that their vertices are bisected, the cumulative work giving the frontal impression of a double-paned window. The frames’ inner surfaces have been lined with dark-blue baked enamel; their shiny exteriors reflect their surroundings, the silver planes dissolving into the lush green expanse of ground and wall. As Pepper would describe Quadro Vuoto, “The surfaces reflect into one another, causing geometries to appear which are not part of the physical format of the work. But even though these internal reflections are illusions, they prefigure the actual shape the crystalline forms will appear to have when viewed from another angle.” 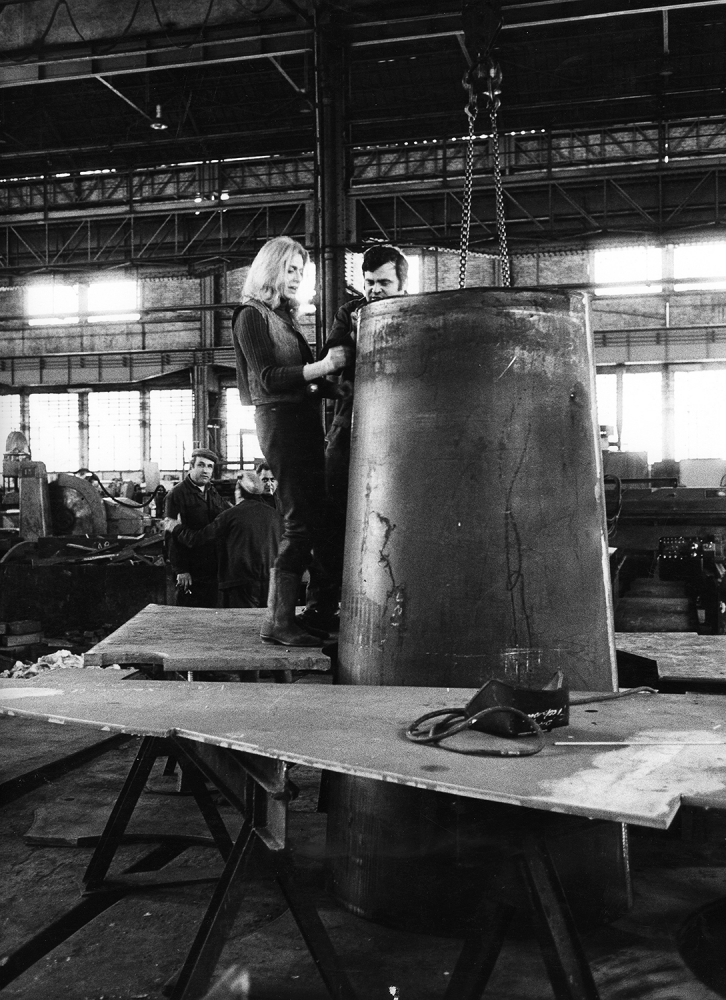 In Sculpture in Place, Pepper’s 1986 monograph, critic Rosalind Krauss articulated how the stainless-steel box-form pieces unsettle a dichotomy within a dichotomy. The insular blurring—between painting (the “picture”) and sculpture (the “square”) —is achieved by the frames’ reflectivity, which ameliorates the object’s visual heft to achieve an ephemeral weightlessness, its flanks presenting a flattened impression of the outside world. The greater obfuscation—between artwork (here “emptied”) and support—is meanwhile produced by the work’s allusions to armatures distinct to each medium. These shallow boxes call to mind picture frames for absent paintings. Meanwhile, firmly rooted on the ground, they give the impression of plinths. Quadro Vuoto can thus be read as an opening salvo for Pepper’s subsequent efforts to subtly destabilize the distinctions between work and support (inner and outer), without disavowing the relevancy of these distinctions. For after all, the permeation upon which her work is predicated presupposes a barrier to be breached. This stance put the artist’s 1960s sculptures at odds with those of her Minimalist peers, many of whom conflated the distinctions or dismissed them as irrelevant. Minimalism additionally disavowed symbolism and metaphor, which Quadro Vuoto, with its allusions to the window and to pictorial space, uses to such witty effect.

Adjacent to Quadro Vuoto on the courtyard grass were works that immediately succeeded the box frames: Odeschalchi and Lago I, both 1970. These low-slung stainless-steel works, which give the appearance of imbricated plates—as if the boxes had been overturned, flattened, and warped—would thereafter morph into a series of pyramids, here represented by the seminal Dallas Pyramid, 1971, a nearly seven-foot-tall angular sculpture, made from Cor-Ten steel, whose sloping plane lifts from the floor to form a point, as if its tip is held aloft by an unseen hand. Pepper’s use of Cor-Ten dates to the mid-sixties, positioning the artist at the forefront of a sweeping sculptural embrace of this medium during the second half of the twentieth century. (It would eventually become associated with the monumental structures of Richard Serra, Donald Judd, and others.) The trademarked name for weathering steel, Cor-Ten was developed for industrial use and is noted for its tendency to form a stable, rust-like patina when exposed to the elements over time, thus eliminating the need for continual surface upkeep. The material’s resistance to corrosion made it a favorite for sculptors like Pepper, who wanted to produce site-specific pieces that would remain constant fixtures of the environments in which they were installed, eliding the archival quandaries that tend to plague outdoor pieces. (Pepper’s interest in the artistic purchase of patina extended beyond her own work: When in 1974 it came to light that Clement Greenberg, then an executor of David Smith’s estate, had stripped several of her friend’s works on his property of their coats of paint, ostensibly to return them to a more “authentic” state, she was among the artists and consultants who spoke out against the critic’s tampering.)

This, among other firsthand observations of sculptures subjected to the whims of their caretakers, would cement Pepper’s investment in Cor-Ten. Her numerous installations employing the alloy are intended not only to withstand the elements but to age in tandem with their surroundings. One of the earliest to feature the material is Dallas Land Canal and Hillside, 1971–75, begun during the same time period as Dallas Pyramid, in which bent Cor-Ten sheets were embedded into a hillside, the mounded earth girding the angled sheets that wrapped around them only partially, and the grassy soil serving as the structures’ remaining faces and reminding the viewer of the protrusions’ innards. Dallas Land Canal and Hillside shares material and temporal overlaps with much of Land Art, yet it stands as much apart from this movement as her sixties sculptures did from Minimalism. Land Art’s proponents celebrated ephemerality and the romance of open (unpopulated) space—a penchant for which would produce far-flung installations (leading to subsequent accusations that the remote works were elitist in their exclusivity). In contrast, Dallas Land Canal, like Pepper’s subsequent investigations into the natural world during the seventies and beyond, was constructed with the general public in mind, and thus was built to last.

“The bold emergence of the curve in Pepper’s most recent work reaches across time to her earliest sculptural endeavors. Yet this is not the visitation of forms forged in the throws of abstract expressionism—this is a bridled monumentality wherein movement breaks through the stoicism of the monument…This is lyricism earned.”—Joseph Antonucci Becherer

In the past decade, Pepper has returned to the organic arcs of her first carved-wood pieces, using the Cor-Ten sheets whose manipulation she has mastered. But unlike her early Laocoön—whose interlocking strands seem fragilely poised, as if attempting to display each twisting coil leaving none to physically support the work—the new group of open, highly refined Cor-Ten loops both expose the works’ planes and suck them back into the sculptures’ interiors, creating forms that appear to delight in their own self-sufficiency. These curved pieces were here represented by Drusilla Senior, 2014, a massive eleven-and-a-half-foot-tall ring split down its center and lilting to its right, as if the giant “O” had been taken in both hands, bent, and twisted. Yet if it is tempting to interpret Drusilla Senior as evidence of a completed, closed circuit, as inner/outer pared to its most elegant and succinct, the work equally embodies the discoveries of a near-80-year career, one informed by a greater network with which Pepper has remained in constant dialogue. The concerns that drive it are as familiar to the emerging sculptor as to the abstract expressionist sculptor Becherer invokes. One looks at the aperture-like ring, which seems to move through while framing the surrounding gallery, and is reminded of the carvings of Angkor Wat reciprocally entwined with the surrounding branches. 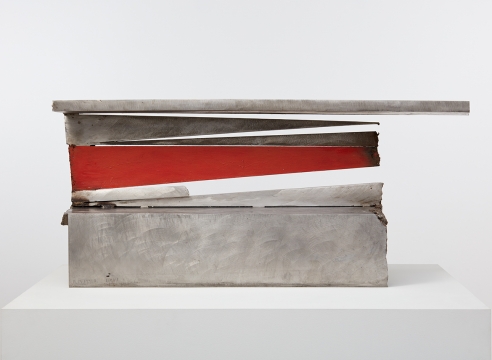